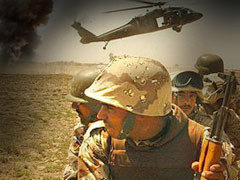 Michael Medved continues with the history of the Arab/Israeli struggle. When the nation of Israel was established in 1948 the Arab world reacted by sending armies against the new Jewish state. The 1948-49 Israeli War of Independence was the first of the five major wars that have rocked the Middle East during the last half century. The Suez Campaign of 1956 erupted when Gamal Abdel Nasser sent the army of Egypt across the Suez Canal to oppose the sparse Israeli defenses of the Sinai. The Six Day War in June of 1967 re-defined the boundaries of the Jewish state. In October of 1973 Arab nations once again struck Israel. In a surprise attack on Yom Kippur, the Jewish people were again fighting for the survival of their state. In 1982, The Lebanon Campaign once more pitted the Israeli army against an army of the Arab world. What, if any, was the role of America in these five middle eastern wars?
Total Run Time: 2hr, 28min
Available on two CDs or audio download