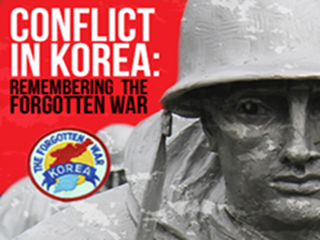 Most Americans know next to nothing about the Korean War, despite the heroic service of the courageous troops who fought there. In three years of intense suffering and sacrifice, that mixed soaring victories with hideous reverses, the United States endured more than 50,000 deaths (on the battlefield, from illness, and in POW camps) with over 100,000 soldiers seriously wounded.

Some of the most vivid personalities in world history played decisive roles in the Korean conflict: Presidents Harry Truman and Dwight Eisenhower, General Douglas MacArthur, and Prime Minister Winston Churchill; on the Communist side, the brutal dictators Josef Stalin, Mao Tse Tung and Kim Il Sung. Despite the fact that all of these titanic figures acknowledged the epic significance of the struggle, contemporary Americans mostly ignore the war because it's so hard to classify. It was neither a global, noble victory like World War II, nor a bitter and divisive failure like Vietnam. The tide of battle at first recalled the daring maneuvers and colorful leadership of the Civil War, but later settled into a punishing stalemate and war of attrition reminiscent of the trench warfare in World War I. Meanwhile, the most crucial and dramatic confrontation of the whole struggle didn't pit Americans against the enemy, but brought a legendary and incomparably charismatic commander into direct conflict with a determined, chronically under-rated president of the United States.

All of this gripping history deserves recollection, especially in view of ongoing threats from the mad, bad regime in North Korea that the conflict of sixty years ago never conclusively resolved. This spell-binding account by Michael Medved mixes the actual voices of Truman, MacArthur and Ike with hit music from the era—including #1 hits honoring a Korean War commander, or crooned by a draftee and PFC who became a Hollywood heartthrob. From the baseball immortal who flew 37 Korean combat missions, to the small town priest who died in a POW camp and is on his way to Catholic sainthood, CONFLICT IN KOREA helps bring to life the indelible personalities, decisive judgments and worldwide stakes of the nation's most misunderstood conflict and assists Americans in REMEMBERING THE FORGOTTEN WAR.