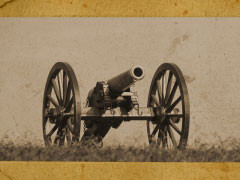 The War for the Union - (Audio CD)

1) WHY THEY FOUGHT: Was the bloodiest war in US history (with 623,000 killed -- the equivalent of 6,000.000 deaths in today's America) about slavery-- or about states rights? Was the war avoidable, and the product of ten years of horrible leadership in Washington (with some of the worst presidents in US history), or was it an "irrepressible conflict" (as William Henry Seward famously called it) that even the most skillful politicians couldn't escape? We'll trace the crucial turning points, historical forces and political personalities (the good, the bad and the ugly) that placed America on the path to cataclysmic conflict.

2) THE TIDE OF WAR: Focusing on the crucial decision points where the South could have actually won the war --- The Battle of Antietam, the Battle of Gettysburg, the Draft Riots in New York, the Presidential election of 1864 and the desperate (but doomed) proposal to use a million black slaves to fight for the Confederacy in exchange for their freedom. If the South had prevailed, what would the two countries (the Confederate States of America and the United States of America) have looked like twenty years after the war -- and a hundred years after the war?

3) WHY THE NORTH WON: Was it sheer population (the North outnumbered the white population of the South by more than three to one), economic power, or the brilliant, incomparable political leadership of Abraham Lincoln? Or did the Confederacy go down because of its internal flaws, and a badly mistaken strategy by Robert E. Lee? What could the South have done to insure European recognition, and why did they fail to follow the inspiration of Virginian George Washington when it came to their own failed (and, ultimately, disastrous) War for Independence? Did moral arguments ultimately doom the Confederate cause?


These explosive questions will be covered in intimate and vivid detail, answering a demand from History Program subscribers to cover America's most epic conflict -- just in time for the sesquicentennial commemorations in 2012-13 celebrating its most decisive battles.