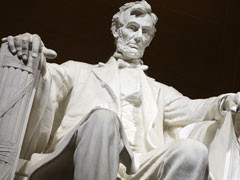 Every day, Michael Medved begins his nationally syndicated radio show with gratitude for America's status as "the Greatest Nation on God's Green Earth." Now he turns his attention to "the Greatest American Story Ever Told" -- the life of Abraham Lincoln.

In the midst of the 150th anniversary commemorations of the Civil War, this in-depth, two-hour presentation probes what Medved calls the three "mysteries and miracles" of Lincoln's extraordinary career:

These questions and more will be answered in intimate, vivid detail -- presenting a complicated, inspiring life that's richer and more relevant than the versions in text books, popular culture, or even the most acclaimed Hollywood movies. Lincoln's story is America's story - and his greatness defines America's greatness - as made clear in this inspiring and eye-opening portrait of the 16th president and his astonishing achievements.