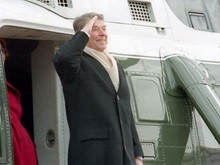 The Legacy of President Reagan

Now you can relive the historic week when dozens of guests and listeners paid tribute to the man whose 1984 re-election landslide victory had as its theme, “It’s Morning in America again.” Fittingly, when Bill Bennett debuted as a talk host in April of 2004, he insisted that his show be named after that very campaign theme. In doing so, every time Bill opens his show with, “It’s Morning in America, I’m Bill Bennett” he honors the man for whom he held the utmost respect.

What Was So Great about President Reagan - Michael Medved

In 1975, the GOP looked dispirited, disheartened, divided and doomed. Republicans had just received a horrible 'thumpin' in Congressional elections, Democrats looked poised to recapture the White House, and an unpopular White House incumbent seemed to drag down the party's chances. Sound familiar? "But in 1976, retired governor of California and former Hollywood star Ronald Reagan made a long-shot run at the Presidency and taught his party how to win again. Today those lessons can still inspire all conservatives and all Americans. In this rousing talk on Reagan's birthday (February 6, 2007) Michael tells a standing-room-only audience the essentials of Reagan's approach - - clarity, cheerfulness and unity -- and the way these qualities can bring new Republican victories across the country. Michael provides sharp political insight and touching, little known details about America's beloved 40th President.