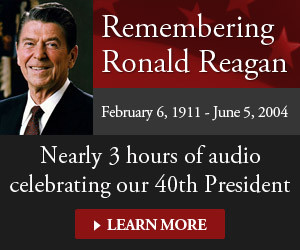 "My friend and colleague Bill Bennett had the great privilege of working closely with President Ronald Reagan. On the 10th anniversary of President Reagan's death, listening to Bill's moving recollections can bring this great and good man back to life for all of us who experienced his leadership, and for children and grandchildren who didn't.  We're fortunate as a nation to benefit from the service of remarkable people like Reagan ÛÓ and Bennett.”

The week following Reagan’s death brought both sadness and celebration as Americans from all walks of life paused to remember our 40th President.

This audio recording contains highlights from that dramatic week of broadcasts, along with full recordings of some of Reagan’s most powerful speeches.

Listen to an audio sample:

Now you can relive the historic week when dozens of guests and listeners paid tribute to the man whose 1984 re-election landslide victory had as its theme, “It’s Morning in America again.” Fittingly, when Bill Bennett debuted as a talk host in April of 2004, he insisted that his show be named after that very campaign theme. In doing so, every time Bill opens his show with, “It’s Morning in America, I’m Bill Bennett” he honors the man for whom he held the utmost respect.

We hope you enjoy this 71-minute audio presentation taken from Bill Bennett’s Morning in America.

Guests featured in this recording include:

Also included are full recordings of these memorable speeches from The Great Communicator:

First Inaugural Address, January 20, 1981 (20 minutes) – Newly elected President Reagan addressed the nation’s economic crisis in this famous address. He boldly declared that “Government is not a solution to our problem, government is the problem.” It would be a theme that reverberated throughout his presidency.

Address to the Nation on the Explosion of the Space Shuttle Challenger, January 28, 1986 (5 minutes) – The nation had never before lost an astronaut in flight. The President’s speech mourned the loss of the Challenger crew and ended with the timeless phrase, “We will never forget them, nor the last time we saw them, this morning, as they prepared for their journey and waved goodbye and ‘slipped the surly bonds of earth’ to ‘touch the face of God.’”

“Tear Down this Wall” – Remarks on East-West Relations at the Brandenburg Gate in West Berlin, June 12, 1987 (26 minutes) – Commemorating the 750th anniversary of Berlin, the President’s speech in front of the Berlin Wall challenged Mikhail Gorbachev – the sitting General Secretary of the Communist Party of the Soviet Union – to “tear down this wall.” Just a few years later, the wall fell and the “evil empire” crumbled with it.

Farewell Address at the Republican National Convention in New Orleans, August 15, 1988 (46 minutes) – The President would give an official farewell from the Oval Office a few months later. But in this speech he thanked the nation for supporting him during the previous eight years. He encouraged then Vice President George H. W. Bush to, “Win one for the Gipper.” And he reminded a nation that was saddened to see his presidency come to an end that America was not in twilight. “Twilight? Twilight? Not in America. Here, it's a sunrise every day -- fresh new opportunities, dreams to build.”

(This is a re-release of a recording originally sold in 2004.)