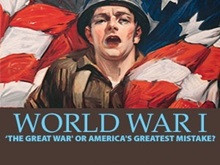 The focus is not on the tide of battle, or the reasons the European powers stumbled into this cataclysmic conflict. In the show, we will concentrate exclusively on America's decision to enter the war after nearly three full years of fighting -- and repeated declarations of neutrality. Wilson won a tough re-election battle in 1916, beating his Republican opponent by a tiny margin of votes, and relying almost entirely on the memorable slogan: HE KEPT US OUT OF WAR. But within 30 days -- just 30 days! -- of his inauguration for a second term the same guy who "kept us out of war" took us into the disastrous and pointless slaughter in Europe, costing 116,000 American lives and costing the taxpayer more money in one year than the federal government had spent during 130 years of prior history, combined! The top tax rate went up from 7 percent to 95% and Wilson's Democrats were swept from office by a disillusioned, enraged public in an epic landslide of historic proportions.

How did the "war to end all war" become the war that made Hitler inevitable? How did Wilson's eloquent Declaration of War message, which promised to "make the world safe for Democracy," lead directly to making the world ready for Mussolini, Stalin and Hitler? And, most startling of all, how did the president's tortured romantic life (with scandal surrounding the death of the First Lady and Wilson's almost immediate re-marriage) contribute to some of the most disastrous foreign policy decisions (and non-decisions) in all of American history? And why do some conservatives argue that America not only entered an unnecessary war, but did so on the wrong side?

This special history program will probe these uncomfortable but profoundly important questions in a frank, fearless and potently provocative way.

EXCLUSIVE - An additional half-hour discussion (not aired with the radio broadcast) that looks at the big questions raised by the dramatic story described in this show. What were Germany's real war aims? How could Woodrow Wilson have avoided taking America to war - and what could he have done late in 1916 to prevent the resumption of German submarine warfare that brought US entry into the war? Michael also examines the cultural impact of "the Great War" and describes his own family's connection, as victims and participants in the European conflict. Don't miss this fascinating material, available only to customers of the Medved History Store.