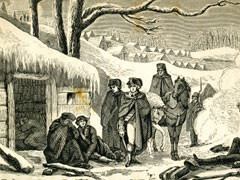 We've seen the painting of George Washington praying in the snow at Valley Forge. Why were his soldiers so poorly clothed and fed? Was this the darkest hour in the Revolution? Were General Washington's prayers answered? Michael Medved has the answers. Part Two: The Campaign for the South is probably the least remembered, but most critical in terms of the ultimate outcome of the war. General Gates is sent to direct the Continental Army. But does he have the military skills to hold the Southern colonies?
Total Run Time: 1hr, 13min
Available on CD or audio download