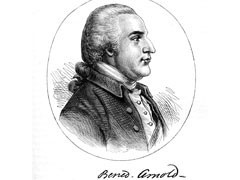 Who was this dark figure in American history? What were the terrible deeds which brought his name to such infamy? How did this man rise to such heights and what drove him to attempt to destroy what he had fought so hard to build? Was he America's greatest villain? And, could the Revolutionary War have been won without his genius?
Total Run Time: 1hr, 13min
Available on CD or audio download