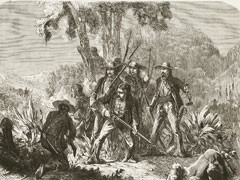 Why was Texas an independent republic? How did California become a US territory? What made Mexico declare war on the United States? How did this war change America? Michael Medved presents the true story of how the West was won.

Part Two: What Caused the War Between the States? Could the Civil War have been avoided? Did America have to go to war to end slavery? Would different leadership have lead to a peaceful resolution of the issues? Who were the people and what were the events and circumstances that pushed the nation toward conflict? Michael Medved weaves together the people, places, politics and events which led the North and the South toward our country's most bloody conflict.