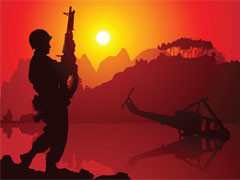 The Vietnam War ~ America's longest, most polarizing conflict ~ continues to divide Americans and to cast its shadow on contemporary policy debates. In the Presidential race between Bush and Kerry questions about the candidates' records during the Vietnam era (the President's National Guard service, Kerry's strident protests as leader of Vietnam Veterans Against the War) often overshadow discussion of more timely issues. These impassioned arguments about the Indochina conflict often confuse young people with no personal recollection or knowledge of Vietnam. This closely argued presentation makes clear the essential elements separating those who fought proudly (and bravely) in Southeast Asia from those who self-righteously opposed the war here at home. Michael Medved designates the "three big lies" that continue to poison our understanding and analysis of the war, arguing against common contentions:
1. That the Vietnam War represented an unconstitutional conflict based upon American imperialism and a desire for world dominance
2. That the military lost the war on the battlefield, and in the process committed horrendous atrocities
3. That anti-war protestors became the true heroes of that turbulent era, and their efforts ultimately brought peace to both the US and Indochina Each of these three claims is a lie and a slander on America and her military.
Each of these three claims is a lie and a slander on America and her military. In this presentation, Michael Medved exposes the truth that's often hidden and shows why and how distortions and outright falsehoods still wield their malevolent influence on too many of our fellow citizens.
Total Run Time: 1hr, 52min
Available on two CDs or audio download