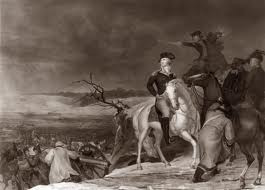 The Continentals Leave Princeton and Winter in Morristown ~ 1777, The Year of the Hangman - (MP3 Download)

Another stunning victory for the Continentals. But, they must move on quickly before the British Army moves against their position. What clever trick did they use to make the enemy think they were many times larger in numbers? What did they find in Princeton that helped them survive the winter months ahead? Why did they bypass the chance to raid the British stores and treasury at Brunswick? What strategy did General Washington use to drive the British out of New Jersey?
The year of the åäÛÏHangmanåäÛå, 1777, was the decisive year in the War. åäÛÏGentleman John Burgoyne" moved down from Canada to recapture Fort Ticonderoga. General Howe was directed to attack from the south, meet Burgoyne at Albany to split the Colonies in half and end the war. The Americans were losing every battle. How could the Revolution be saved?

Total Run Time: 54min
Available on one CD or download.