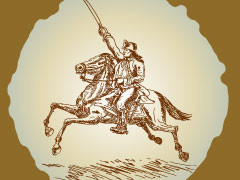 Part One: The Battle of Brandywine ~ General Howe plans to capture Philadelphia and establish the British presence in America's largest city as the center of royal authority in the Colonies. General Washington sets his Army at Brandywine Creek to protect the city from the Redcoats.

Part Two: The Battle of Germantown ~ General Washington needed a victory. The Continentals were trying to convince the powers in Europe that the Americans were winning their war for Independence. A gory attack on a rebel camp had left Washington vowing revenge. Surprising the British at Germantown might just give them that needed victory.