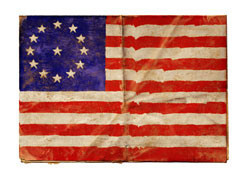 The Campaign for the South: The Swamp Fox ~ The Battles of Kings Mountain and Cowpens - (MP3 Download)

Part One: Francis Marion had two main objectives in 1780 and 1781...The first was to keep a viable military presence opposing the Royal troops and the Loyalists in the South. The other was to create as much damage and consternation to the British Army and the Tories as possible. His exploits are the stuff of legends. What were the facts and what is legend? Michael Medved pursues the crafty Southern Rebel and captures the true story of the notorious "Swamp Fox."

Part Two: The Battles of King's Mountain and the Cowpens were the key events deciding the Southern Campaign. Some of the cruelest and bloodiest fighting of the war took place there. How did the personalities of the military leaders on both sides, shape the events which turned so gruesome and so decisive?