Due to safety measures in place to protect our employees from COVID-19, we are experiencing slight delays in shipping. Thank you for your understanding. 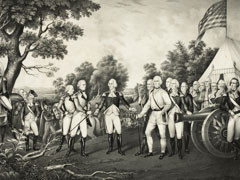 The Battle of Saratoga: The Most Rebellious Race ~ "History Will Tell Lies" (MP3 Download)

The Most Rebellious Race" is what General John Burgoyne called the New England Colonials. His British army moves south out of Canada to split the American Colonies and end the war. Fortified by German Troops, 1,000 Indian braves and a collection of American Tories, they battle the elements of the wilderness and the rebel forces in the most decisive battles of the war. ~ "History will tell lies" stated George Bernard Shaw regarding the Battle of Saratoga. General Burgoyne has divided his army into three columns. One goes east to raid Bennington. One goes west to take Fort Stanwicks. Burgoyne leads his main force south toward Albany. There he intends they will all come together, take the town and join General Howe's troops coming up from the south. The bloodiest battles of the war take heavy tolls on both sides. Burgoyne struggles forward as far as Saratoga.