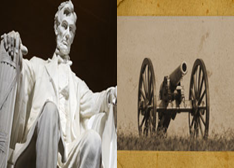 Lincoln and the Civil War (Compilation of Audio Downloads)

How did a desperately poor child of illiterate parents, with less than a year of total schooling, emerge as one of the greatest minds of the 19th century? How did a country lawyer with no military experience become one of the greatest war leaders in human history? Lincoln, a "tender-hearted" tee-totaler who hated blood so much he couldn't stand hunting or animal cruelty, became a ruthless commander-in-chief in the most ghastly, death-dealing war America ever-endured. What stood behind the transformation?

Was the bloodiest war in US history about slavery or about states’ rights? If the South had prevailed, what would the two countries (the Confederate States of America and the United States of America) have looked like twenty years after the war -- and a hundred years after the war? Was it sheer population, economic power, or the brilliant, incomparable political leadership of Abraham Lincoln?

These explosive questions will be covered in intimate and vivid detail, answering a demand from History Program subscribers to cover America's most epic conflict -- just in time for the sesquicentennial commemorations in 2012-13 celebrating its most decisive battles.

- The Real Licoln
- The War for the Union