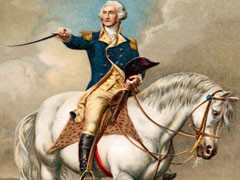 A Time to Fight! - George Washington Builds an Army - The Invasion of Canada - (MP3 Download)

Part One: Michael Medved sets the scene as the Colonies start to take up arms. He brings to life the people and events which shaped the personality of America's first great leader. Learn how Washington planned his life and career and how fate moved time and time again to change everything.

Part Two: The invasion of Canada could have been a major victory for the Continentals. The Great White North would probably be part of the United States today. But, strategic mistakes, both great and small, turned history and led to the creation of another country. "Oh, Canada!"