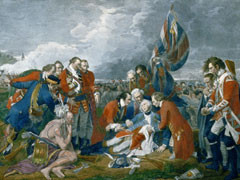 The Invasion of Canada and The Battle of Quebec - (MP3 Download)

Canada was very nearly part of the United States. To protect the northern routes to the American colonies, troops were sent to secure Toronto and Quebec. Despite brutal weather, tactical mistakes and the loss of critical leadership on the battlefield, the American Army nearly captured the strategic city/fort of Quebec. ~ The invasion of Canada could have been a major victory for the Continentals. The Great White North would probably be part of the United States today. But, strategic mistakes, both great and small, turned history and led to the creation of another county. "Oh, Canada!" ~ Meanwhile, Washington receives help from the heavens to drive the British out of Boston.
Total Run Time: 52min
Available on CD or audio download