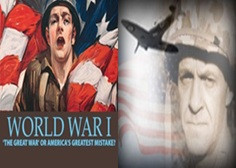 The twentieth century was a time that changed the world. With such incredible highs and devastating lows the world would never be same. Two pivotal points in particular, World War I and World War II, would affect the dynamics of the world in ways that are still felt today. With the one hundredth anniversary of the beginning of the First World War coming in August of 2014, learn the facts of exactly how these wars affected human existence. In these two programs, Michael Medved gives a provocative and unbiased opinion of the First and Second World Wars.

World War I:  "The Great War" OR America's Greatest Mistake?