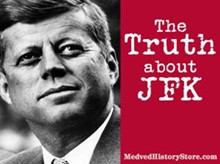 November 22, 1963 remains one of the darkest days in American history; comparably traumatic, for those who lived through it, to the terrorist slaughter of September 11, 2001. The sheer senseless of John F. Kennedy's assassination made his sudden death especially horrifying and the unanswered questions swirling around the tragedy have denied the nation the sense of closure and comprehension that this disaster demands.

Assuming that Lee Harvey Oswald murdered the president (as all responsible historians do) why did he do it? Was Oswald's own murder by Jack Ruby a terrible coincidence or an indication of a wider conspiracy? Why do a majority of Americans to this day remain convinced that Oswald didn't act alone? And, most intriguingly, how might a second term have altered the nation's history if JFK had escaped death and won re-election in 1964?

In this special history program, Michael Medved speaks with authors of some of the most important new books on the assassination and the Kennedy presidency, including Jeff Greenfield, Robert Dallek, Peter Savodnik and others. He also provides a brisk, comprehensive summary of the indisputable facts of JFK's biography and the tragic hours in Dallas that claimed his life at age 46.

Throughout this comprehensive program (with four hours prepared for broadcast, instead of the usual three), Michael stresses five aspects of Kennedy's life (and death) that most Americans misunderstand. 1) His status as an underdog outsider "fighting against the establishment" 2) His youthful vigor, robust fitness and athleticism 3) His visionary "idealism" 4) His character and good judgment and 5) His death as a martyr to a noble cause.

The "truth about JFK" turns out to be more complex and fascinating than air-brushed nostalgia and misleading arguments regular promoted by mainstream media.

There are four unique sections and the first one features:

The second section includes: Jeff Greenfield, author of If Kennedy Lived and Camelot's Court: Inside the Kennedy White House by Robert Dallek.

The third section is a conversation with A Cruel and Shocking Act: The Secret History of the Kennedy Assassination by Philip Shenon and The Interloper: Lee Harvey Oswald Inside the Soviet Union by Peter Savodnik

Additional Resource: The Dark Side of Camelot by Seymour M. Hersh