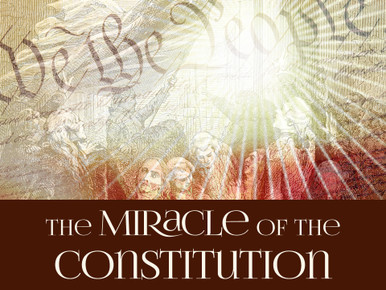 The Miracle of The Constitution (Audio CD)

The Constitution of the United States is so widely revered, so universally accepted as the foundation of our freedom, that most people today simply assume that it's always been there -- as intrinsic an aspect of the American experience as the Great Lakes or the Rocky Mountains.

The untold story of our founding charter, however, is full of close scrapes, barely averted disasters, angry disputes, and miraculous rescues.

This very special history program, released to coincide with Constitution Day (September 17th), tells the exciting and astonishing inside story of the fierce and fearless founders who beat the odds to launch a new government.

The Constitution only became necessary because a prior experiment had failed, miserably, leading to chaos, dysfunction and even a bloody revolution by poor farmers who threatened to extend their rebellion from western Massachusetts to the rest of the country.

How did George Washington, James Madison, Benjamin Franklin and their colleagues subtly overthrow the existing order under the Articles of Confederation, and hijack a "Federal Convention" in Philadelphia to start from scratch in designing a new plan of government?

Why did they decide on a single president, instead of three -- as many delegates demanded?

How did they handle the explosive and divisive issue of slavery?

And what about the ardent insistence by many founders that the "public servants" of the new federal state must serve at their own expense, with no compensation from taxpayers?

Finally, what unresolvable issue come within a heart-beat of blowing up the whole convention and exploding the union, except for the heroic decision by a foppish, elderly, little-known Marylander named Daniel of St. Thomas Jenifer?

These stories and more unfold in this riveting presentation -- that concludes with a stirring account of the political warfare that raged across the country to achieve ratification of the new Constitution in spite of bitter opposition from anti-Federalists led by the greatest orator of his time, Revolutionary hero Patrick Henry.

You'll experience the inspiring struggle of dedicated activists -- combining confrontation and compromise -- to establish a functioning Republic that has lasted with relatively minor changes for more than 225 years, and you'll also find that the issues at stake in these long-ago debates have special relevance to our arguments of today.

The Miracle of the Constitution shows why the framers were right to perceive - as they all did - that God, fate, or Providence played a big role in guiding their work.

Listen to a sample of this program:

This version comes on 2 Audio CDs.