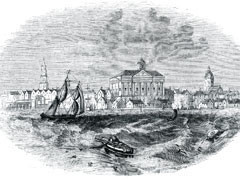 Perhaps the most amazing battle of the Revolutionary War was the British naval attack on this southern port city. How did a handful of defenders in a flimsy mud fort defeat the greatest naval force in the world? Meet some of the outrageous personalities of the time as the south also fought for liberty. ~ Independence was not at first a popular movement in the colonies. The Continental Congress slowly was led to consider a declaration of independence as the struggle progressed. Why was Thomas Jefferson selected to draft the document? How was his original draft changed and by whom?