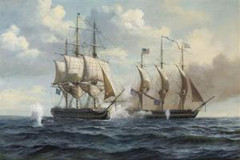 The Empire Strikes Back ~ The Battle of Long Island - (Audio CD)

Despite his victory at Boston, Washington knew that the Royal forces would move next to capture New York. He moved his troops south to defend Manhattan. But, the British were not going to underestimate the Colonials again. They brought an overwhelming force determined to capture the rebel leaders and crush the resistance. Hopelessly outnumbered, Washington established his defenses and braced for the conflict.