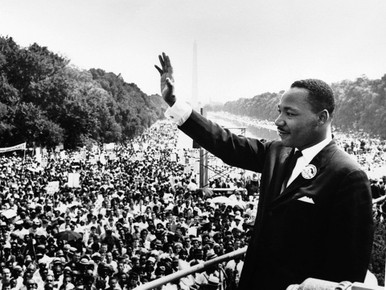 Providence and The Prophet: The Meaning of Martin Luther King (Audio Download)

Only four individuals in American history have ever been honored with federal holidays bearing their names: Christopher Columbus, George Washington, Abraham Lincoln and Martin Luther King, Jr. Though separated by 500 years of history and dramatically divergent backgrounds, these four shared a common characteristic: an unshakable sense that their lives had been shaped by a higher power, to serve grand purposes. They each believed deeply in divine providence and meant to play a potent role in the new civilization rising in the New World.

In this special history program, PROVIDENCE AND THE PROPHET: THE MEANING OF MARTIN LUTHER KING, Michael Medved marks the fiftieth anniversary of Dr. King’s assassination by emphasizing the miraculous, God-haunted aspects of his brief life.

As he often noted, King had been born to the ministry – his grandfather (his mother’s father, A.D. Williams) had been one of the most influential leaders of the black Baptist church and his father, known as “Daddy King,” married that preacher’s daughter and took over his Atlanta pulpit. Shortly thereafter, “Daddy King” traveled to Germany and felt so inspired by visiting sites associated with the Protestant Reformation that he changed his own name, and that of his five-year-old son (and namesake), from “Michael King” to “Martin Luther King.” That change provided the younger King with a resonant designation that carried historic weight, even before he began his pulpit career in Montgomery, Alabama, at the age of 26.

The decision to defy his father’s wishes and to leave the family base in Atlanta produced huge consequences --placing Dr. King in the right place at precisely the right time to seize his place in history. Less than six months after his arrival in Alabama, a local seamstress named Rosa Parks refused to give up her bus seat to a white passenger, resulting in the Montgomery Bus Boycott. As the “new kid in town,” young Reverend King accepted the burden of becoming mouthpiece for that boycott --- which made him a national and international celebrity almost overnight. Had King taken any of the other five jobs offered to him, it’s hard to imagine how he would have become the most consequential leader in African-American history.

At the beginning of his rise, he became even more certain of his preordained destiny after experiencing his “Kitchen Table Vision” – a midnight epiphany when an exhausted, disheartened felt God responding directly to his prayers with an unmistakable command.

This revelation – an uncomfortable episode for many secular historians – recalled MLK’s experience cheating death repeatedly as a child, surviving three serious accidents that might have easily killed him. During the bus boycott, he endured scores of threats and two serious bombing attacks on his home (and infant daughter). At age 28, a delusional African-American woman stabbed in the chest at a book-signing, leaving him literally “one sneeze away” from his demise.

PROVIDENCE AND THE PROPHET features moving excerpts from Dr. King’s greatest addresses as well as highlights from lesser-known public utterances - like the explosive “Give Us the Ballot” speech during his first March on Washington in 1957, six years before “I Have a Dream.” That unforgettable and triumphant vision involved King shoving aside his wordy prepared text and soaring, without notes or preparation, to its thrilling conclusion. Medved’s narrative also recalls the way King became deeply controversial in the last year of his life – alienating LBJ’s administration with his opposition to the Vietnam War, and alienating “Black Power” radicals with his consistent devotion to non-violence. At the same time, King faced a nightmare of harassment by the FBI, based on J. Edgar Hoover’s conviction that the Nobel Prize winner worked with communists to undermine America. Hoover’s hostility generated a decade of wire-tapping surveillance, and even a diabolical attempt to force his suicide.

Medved’s approach highlights the excitement, exaltation and searing tragedy in King’s incomparably consequential 39 years – along with King’s 10 years of eerie premonitions of his own premature death.

The CD and MP3 versions of this program feature an additional 20 minutes of commentary and King speech excerpts, not available as part of the broadcast edition of this release. PROVIDENCE AND THE PROPHET is certain to become one of the most important and impactful programs ever released by the Medved History Store, providing an appropriate commemoration of a Christian leader lost to his country some fifty years ago.