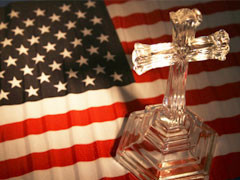 Aired May 31, 2010 ~ Recent weeks have seen a range of bitter controversies regarding the First Amendment and the so-called "wall of separation" between church and state, ranging from battles over the Mojave Cross, the National Day of Prayer, the role of military chaplains and don't ask/don't tell, and the right of hospital personnel to opt out of participation in abortions. In all of these conflicts, militant secularists insist that they are upholding long-standing American traditions and fighting for religious liberty against aggressive incursions by the dreaded "Christian Right." In making their case, uncompromising separationists insist:
1. America was founded by refugees from religious persecution, who wanted no government entanglement with faith
2. The Founders were religious skeptics, often Deists, who deeply feared the influence of Christianity on the new nation
3. Thomas Jefferson in particular (the author of the Declaration of Independence and Third President) wanted to minimize the role of religion in government and society
4. The First Amendment strictly forbade any endorsement of religion by government at all levels-- even if that endorsement was general and non-specific
5. Current religious conservatives are attacking our cherished separationist traditions, and thereby threatening the Constitution, our liberty, our national harmony, and America's long-accepted secular essence In this special broadcast, MICHAEL MEDVED shows that NONE of these claims are true, or even close to the truth.
Using original sources, eye-witness accounts, and amazing details of the historical record, he dissects the prevailing lies that suggest that the U.S. was always intended to be a secular, not Christian nation. Medved explains that early settlers sought purity, not tolerance; that leaders of the American revolution fought for sanctity, not separation; that the First Amendment meant to guard unity, not secularism; that the great leaders of the Republic struggled with faith, rather than celebrating doubt. In the process, Medved reveals fascinating, unexpected insights on what the First Amendment really meant to accomplish, what Jefferson said in the rest of the letter suggesting a "wall of separation between church and state," how we got our national motto "In God We Trust," and how it's no accident that every patriotic song that's cherished by the American people invokes God at some point. In an entertaining, eye-opening and provocative brand new broadcast (recorded for the first time in May, 2010), Medved concludes that America IS, in fact, a Christian nation --- and that the blessings conferred by this nation on its historically crucial Jewish community (and other minorities) came because of, not in spite of, our Christian heritage.
Total Run Time:  1hr, 52min
Available on two CDs or audio download