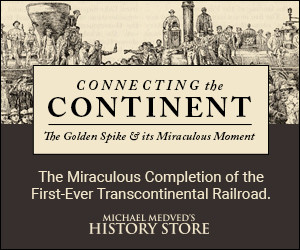 Connecting The Continent: The Golden Spike and its Miraculous Moment (Audio CD)

Completion of the first-ever transcontinental railroad in May of 1869 struck nineteenth century Americans as an open miracle, a development of profound spiritual significance and not just a mechanical achievement. Contemporaries described it as "the great event of the world" and "the most magnificent project ever conceived." Its completion brought national delirium and celebrations in every big city and country village in the country featured blaring brass bands, massed choirs singing hosannas, marches, fireworks, free flowing liquor and dancing in the streets. For the first time, the bustling cities of the east coast and Midwest connected directly to the remote settlements in California and Oregon. Economic planners understood that the rising American colossus that had already begun to dominate the Atlantic Ocean would now be empowered to take command in the Pacific and to lead the way in trading with Asia. Some of the most influential voices behind the "great iron road" also saw it as a way to unite the whole world in faith and to spread the gospel of Christianity. Walt Whitman wrote a soaring poem hailing the development's cosmic significance.

But how did the nation do it, shortly after four devastating and destructive years of Civil War? As it happened, the same figure who guided the Union to battlefield victory also provided the driving force behind connecting the continent: Abraham Lincoln had been preaching for a Pacific Railway since he first entered politics at 23, and a time when he hadn't yet even seen a train. In addition to the president (who pushed his railway bill through Congress in 1862), a Union General who survived three devastating battle-field wounds also played a crucial role, as did a dreamer in California who became so manically obsessed with the dream of building the cross-country railroad that he earned the contemptuous nickname "Crazy" Judah. While such august figures provided the vision and the dreams that made the railroad possible, the hard work came from three ill-assorted groups of outcast workers: Chinese "Coolies" who could barely speak English, but refused to surrender to danger or exhaustion; Irish-American veterans of both the Union and the Confederacy, whose evening relaxation provided the American idiom with the strange phrase "hell on wheels"; and pious Mormon pioneers who toiled by the thousands at the direction of their leader Brigham Young, an early promoter of, and investor in, the transcontinental railroad.

These characters and many more play roles in the dramatic story that unfolds in Michael Medved's latest history program, CONNECTING THE CONTINENT: THE GOLDEN SPIKE AND ITS MIRACULOUS MOMENT. This spell-binding but often forgotten chapter in our history has important lessons for today, with its reminder of a time when America felt confident in great undertakings, and government and business collaborated, rather than collided, on huge projects. The story also shows the way that the railroad seemed magical and supernatural to those who marveled at its successful construction, and helped restore post-war faith in the nation's divinely directed destiny.