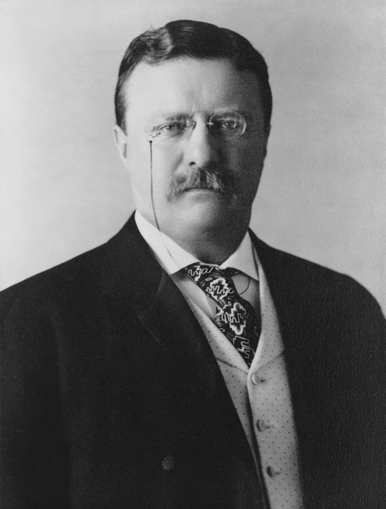 More than a century before Donald Trump captured the presidency, another brash New Yorker roared into the White House and shook up the stodgy Washington establishment with his irrepressible energy, his dominating, distinctive personality and his insatiable appetite for political combat. Theodore Roosevelt (who hated the nickname "Teddy" even more than the current incumbent dislikes "Donny") also offered stark contrasts with the man-in-charge of the moment. TR (the first president ever designated by his initials) was the youngest man ever to serve as president; Donald Trump was the oldest to win election. Roosevelt was a brilliant student at Harvard, the author of 38 books on history, zoology, hunting and world travel, and something of an intellectual snob; Trump enjoys a visceral connection with ordinary Americans and takes regular pot-shots at over-educated elitists. TR maintained a distinctly old-fashioned, puritanical and chivalric attitude toward women, while Trump.....well, not so much. In any event, no president before or since Theodore Roosevelt reached greater heights of public popularity or more overwhelming command of what he himself described as "the Bully Pulpit." In this new history program, Michael Medved describes TR as "The All American Boy" who managed to combine adventure (including dangerous journeys through African and South American jungles) with epic courage on the battlefield (leading his men, illogically unscathed, in a decisive conflict in which nearly a quarter of them suffered death or serious wounds. He even managed to establish himself as a straight-shooting, tough-talking cowboy and rancher on the raw frontier, though his silver spurs and handsome belt buckle were from Tiffany. The first president to travel abroad, to fly in an airplane, to participate in boxing matches in the White House, to complete a lengthy speech with an gunman's bullet in his chest, Roosevelt doubled the size of the US Navy, built the Panama Canal through sheer force of will, won a Nobel Peace Prize (which he actually deserved)  and led America into world dominance in what he recognized would be "The American Century." This history program, bursting with relevant lessons that could uplift today's polarizing politics, describes one of the most compelling individuals ever to play his flamboyant role in the American pageant—or to shatter the political world of his time by launching his insurgent (and doomed) Bull Moose Party in a valiant bid to return to the White House.

But the key to the young president who broke every rule and laid down new ones, was provided by a British diplomat who became on of his close friends."You must always remember," wrote Sir Cecil Spring Rice to his associates back in London, "that the president is about six."

His perpetual youth—his all-American boyishness till the day of his death in 1919—remains the essential element in the appeal of a ferociously proud Republican who remains one of the greatest of all American leaders.