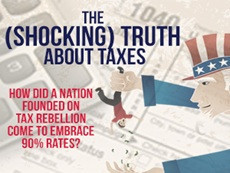 The (SHOCKING) Truth About Taxes: How Did a Nation Founded on Tax Rebellion Come to Embrace 90% Rates? - (MP3 Download)

The Founding Fathers risked their lives, fortunes and sacred honors to stop consumption taxes that amounted to barely two cents on the dollar, but less than 200 years later the nation they founded embraced top income tax rates above 90 percent. For most of our history, courts and legislators viewed federal income taxes as unconstitutional and an abomination but by 1913 a broad, new national consensus, including most Republicans, led to an amendment to the Constitution giving Washington nearly unlimited taxing power. At first, the top tax rate (7%!) applied only to incomes above $10,000,000 (in today's dollars) but within a hundred years federal, state and local taxes combined to take more than 40 cents out of every dollar, earned by every American in the private sector. The march to  higher taxes and bigger government has been interrupted on occasion by heroic tax reformers, including Calvin Coolidge, Ronald Reagan, George W. Bush---and, importantly, John F. Kennedy. Unfortunately, it's a Republican president (no, not one named Bush) who could go down as the biggest, most disastrous tax-raiser in history.

This new history program will probe the mysteries of tax history: what were the Sons of Liberty really protesting in the Revolutionary Era and with the Boston Tea Party? How did Pennsylvania tax resisters nearly bring on civil war in the early years of the Republic? Why did America's disastrous experience in the War of 1812 first produce the disastrous notion of a federal income tax? Did Lincoln's backing of a war time income tax indicate his support of bigger government, more taxing power? Why did the Supreme Court and our greatest legal thinkers look askance at new tax schemes on behalf of what patriot pamphleteer Thomas Paine called government's "greedy hand"? And what are the prospects for radical reform schemes (Fair Tax, Flat Tax) most frequently discussed today?

THE (SHOCKING) TRUTH ABOUT TAXES will answers these and other questions, offering Americans the crucial background they need to understand one of the most important issues for the future of our economy - and our liberty.