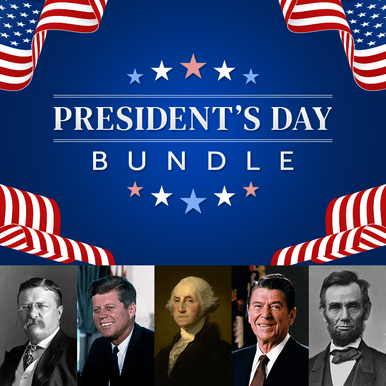 A Compilation of History Programs Dedicated to Some of the Most Influential Presidents.

Description: This history program, bursting with relevant lessons that could uplift today's polarizing politics, describes one of the most compelling individuals ever to play his flamboyant role in the American pageant—or to shatter the political world of his time by launching his insurgent (and doomed) Bull Moose Party in a valiant bid to return to the White House.

Description: In this special history program, Michael Medved speaks with authors of some of the most important new books on the assassination and the Kennedy presidency, including Jeff Greenfield, Robert Dallek, Peter Savodnik and others. He also provides a brisk, comprehensive summary of the indisputable facts of JFK's biography and the tragic hours in Dallas that claimed his life at age 46. The "truth about JFK" turns out to be more complex and fascinating than air-brushed nostalgia and misleading arguments regular promoted by mainstream media.

Description: A fascinating biography of the Father of Our Country. Michael Medved provides an intimate first person account of his family life, his character, his values, and his personal trials. Why were those who met him so awed by his presence? Why did an aging Indian Chief seek him out? What did he write as a teenager that shaped his personality? What made him laugh? AND what about those hidden love letters? The answers to all these questions, and much more, are in this recording from the Michael Medved Show.

Description: All conservatives-and most Americans-have a strong sense that Ronald Reagan was a great president but nearly twenty years after he left office, we're not always able to explain why. This new broadcast will spell out the elements of Reagan's greatness -- as a statesman, thinker, Republican politician, radio broadcaster (in both sports and political commentary), Hollywood actor (much better than usually acknowledged!), deeply religious Christian (also not often acknowledged), husband-and-father, and friend. The broadcast will also feature a personal, exclusive, hugely revealing on-air interview with one of the people who knew President Reagan best--his son (and youngest child) Ron Reagan, Michael's friend (and fellow talk show host). The broadcast will also feature some touching highlights of Reagan's unforgettable speeches, interviews and press conferences. A surprising, eye-opening look at one of the great lives of the twentieth Century and a complex individual who seems simultaneously familiar and mysterious.

Description: Every day, Michael Medved begins his nationally syndicated radio show with gratitude for America's status as "the Greatest Nation on God's Green Earth." Now he turns his attention to "the Greatest American Story Ever Told" -- the life of Abraham Lincoln. This program presents a complicated, inspiring life that's richer and more relevant than the versions in textbooks, popular culture, or even the most acclaimed Hollywood movies. Lincoln's story is America's story - and his greatness defines America's greatness - as made clear in this inspiring and eye-opening portrait of the 16th president and his astonishing achievements.