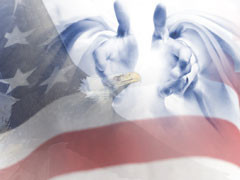 Michael Medved recounts events that serve as evidence of a higher power in world and American history. He describes the strange events on the 50th anniversary of the Fourth of July and the numerous miraculous events in the life of George Washington. He documents divine intervention and mysterious events in the War Between the States. He deals with events in the 20th Century, including the life of Teddy Roosevelt, Franklin Roosevelt, Ronald Reagan and John Paul II.
Total Run Time:  1hr, 52min
Available on two CDs or audio download