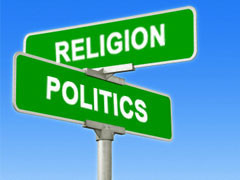 Faith in the White House ~ Essential or Inappropriate? - (Audio CD)

Is the separation of church and state violated when the President of the United States declares his faith in God? Michael explores the issue of "Faith in the White House" as the topic of this live Sunday morning presentation to the congregation of Bayside Community Church in Kingston, Washington. Also included in this recording is the Christmas Eve radio broadcast by President Franklin D. Roosevelt on December 24, 1944. This recording is provided courtesy of the Franklin D. Roosevelt Presidential Library and Museum. Recent polling about the Presidential race shows an overhwhelming majority of Americans unwilling to vote for an atheist. Many "enlightened" and politically correct commentators will declare that this represents an unacceptable religious prejudice, but in this dynamic and provocative talk Michael makes the case that it's appropriate to do everything possible to keep an atheist from the White House. He makes the case that in our founding documents, we view our liberties as a gift from God --- and those who deny God must, inevitably, view freedom as arbitrary and negotiable. Moreover, any President who openly denied the existence of a Creator would alienate himself in an unhealthy way from the nation's profoundly religious majority-- and from hundreds of years of American tradition, where the nation's non-Christian religious minorities (very much including Jews) have thrived not in spite of our Christian heritage, but because of it. As an added bonus, this audio CD features the precious, complete recording of Franklin D. Roosevelt's moving Christmas message to the troops in 1944 at the height of World War II-- radio broadcast specifically cited by Michael in his lecture. Here, the President of the United States was making specific references to Jesus that would drive today's ACLU into apoplexy.
Total Run Time:  1hr, 1min
Available on CD or audio download