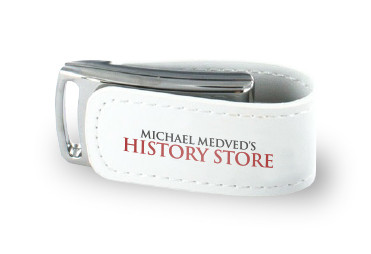 Is America Christian? Although faith and religion have been an obstacle at times, there is no denying its relevance in the history of the nation; in our schools, government, and our daily lives.

Over the years, Michael Medved has recorded nine riveting history programs explaining the pivotal impact these facets have had in American history.

For the very first time, you can now purchase all nine of Michael’s programs on faith, religion and politics in one collection. That’s over eight hours of audio dedicated to explaining how faith has been used in the structure of the United States since its conception. As an added bonus; you will receive two additional programs for FREE!

In this eye-opening compilation, Michael examines the history of the Unites States, and demonstrates how the greatness of this country can only have come about with the guidance from divine intervention.

This one of a kind compilation includes these programs:

God’s Hand on America - Michael recounts events that serve as evidence of a higher power in world and American history. He describes the strange events on the 50th anniversary of the Fourth of July and the numerous miraculous events in the life of George Washington.

Is America a Christian Nation - Using original sources, eye-witness accounts, and amazing details of the historical record, Michael dissects the prevailing lies that suggest that the U.S. was always intended to be a secular, not Christian nation.

Prayer & Four Pillars of Patriotism - Is prayer patriotic? Learn the four pillars of patriotism and discover how prayer helps to direct our patriotic spirit.

Divine Providence in American History - In this live presentation, Michael recounts events which serve as evidence of a higher power in world and American history.

The case for Divine Providence in U.S. History - this program covers the unheralded and amazing aspects of the American Revolution, the conquest of an empty continent, and religious visionaries who helped the nation achieve and explain its destiny.

Faith in the White House - Michael explores the issue of "Faith in the White House" as the topic of this live Sunday morning presentation to the congregation of Bayside Community Church in Kingston, Washington. Also included in this recording is the Christmas Eve radio broadcast by President Franklin D. Roosevelt on December 24, 1944.

Pro-Life Revolution - In a stirring and unusually personal address, Michael describes the transformation of his own thinking on abortion, enumerating the three factors that contributed to his own (and the nation’s) Pro Life Revolution: RESULTS, RELIGION, and RELATIONSHIPS.

Myth’s, Lies, Truths About Jewish Religion - In this new program, Michael sweeps away much of the confusion concerning Jewish practices and theology. In a highly personal and provocative approach, Michael attempts to correct some of the most prominent mistakes that regularly turn up in conversations about the Jewish faith.

Miracle of the Constitution – The untold story of our founding charter. This program tells the exciting and astonishing inside story of the fierce and fearless founders who beat the odds to launch a new government

Why they Fight: The Story of the Arab Israeli Conflict – Michael clears up the misinformation and outright lies about the dark and troubled history of the Middle East.

AVAILABLE ONLY ON USB FLASH DRIVE