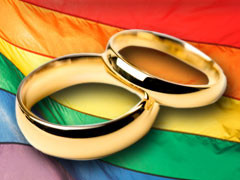 In the drive to win government endorsement for same-sex marriage, gay activists have managed to define the national debate with endless repetition of a series of ten outrageous lies, all misleading, dishonest, and distorted. But they have been advanced so frequently and so passionately by gay activists and their supporters, that itåäÛªs not enough to answer them with emotion. Defenders of traditional marriage need logic, facts, and a powerful argument- all provided by Michael Medved in this impassioned lecture (with questions and answers) delivered in March of 2004.