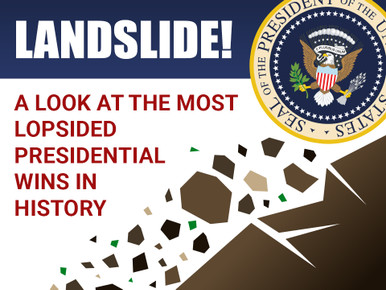 LANDSLIDE! A Look at the Most Lopsided Presidential Wins in History - (Audio CD)

LANDSLIDE! - AND HOW TO RECOVER

Every presidential candidate dreams of one outcome above all for his (or her) campaign for the White House: winning a monumental LANDSLIDE that changes the political landscape in fundamental ways. For the candidates and political parties on the losing end of such crushing defeats, there's an obvious challenge: how do you recover and rebuild to score future victories.

In this new history program, LANDSLIDE! - AND HOW TO RECOVER, Michael Medved looks at the most lopsided electoral outcomes in the history of the two-party system, focusing on four big presidential winners: FDR, LBJ, Nixon and Reagan. Amazingly enough, the winners themselves didn't anticipate their smashing victories, and each of them worried about circumstances that could have produced very different outcomes. For instance, two assassinations (and an assassination attempt) clearly changed the course of history and made these landslides possible.

It's also striking that in three out of the four campaigns described here the losing party recovered quickly -- winning the presidency four years later in two cases, and just eight years later in another. In only one case did the successful candidate's landslide triumph mean long-term damage for the opposition party. What are the crucial lessons from history for a political party hoping to make a big comeback after a dispiriting loss?

These and other questions will be raised and answered in a new history program full of fascinating detail, with historic sound-bites of stump speeches, debates, conventions and even campaign songs that recreate the excitement and amazement of four of the most remarkable battles in US electoral history.